PLANS have been announced to build 350 additional homes across the north of the borough.
Solihull Council has outlined proposals to develop four sites over the course of the next 12 years, as part of ongoing efforts to tackle the local housing shortage.
In the three “Regeneration” wards, homes have been allocated as follows: Chester Road/Moorend Avenue (100), Kingshurst Village Centre (100), Jensen House/Auckland Drive (100) and Arran Way (50).
Across the borough as a whole, the new version of the council’s Draft Local Plan sets out plans to build 6,150 additional dwellings.
In some respects, North Solihull has a relatively small quota – just over one in 20 of the properties have been assigned to this part of the borough.
Interestingly, no further development sites have been identified in Castle Bromwich or Marston Green (which is likely to be a particular relief to the latter, given the pressure that recent expansion has placed on local services.)
While it is villages such as Dickens Heath and Knowle which have been allocated a greater number of homes in the latest set of figures, concerns are likely to be raised about the decision to review the Local Plan only three years after the original document was finalised.
Solihull Council has identified three main reasons for why it has had to once again reopen the debate about housing.
First and foremost, a legal challenge has found fault with the original plan and the local authority has been forced to reconsider its arrangements.
Then there is the fact that Birmingham City Council is struggling to meet its own housing targets, with the suggestion that areas such as Solihull will have to help their larger neighbour meet the shortfall.
Finally, the high-speed rail plans and in particular the interchange station being built near the NEC will require alterations to the plan previously agreed in 2013.
A council spokesman said: “We are continuing to work closely with...communities to ensure they are aware of the revision of the Local Plan and we will continue to support this bottom-up community approach to planning.”
The revised proposals, available to view here, will be out for consultation until January 30.
Posted by Other_side_of_Solihull at 09:37 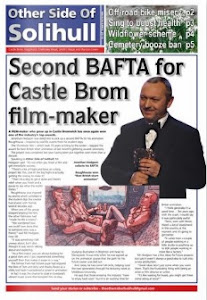 Our new issue is out now